The Keys are known for some unique experiences that are hard to find anywhere else. Everyone loves to go to the salon and get a pedicure and relax but, you can do that in every city in the world. What do we do down here in the keys? We get fish pedicures! What in the world is a fish pedicure you ask? A fish pedicure, also known as a fish spa, involves patrons dipping their feet in water filled with small fish called Garra rufa. Garra rufa are sometimes referred to as “doctor fish” because they eat away dead skin found on peoples’ feet, leaving newer skin exposed. They look like little minnows. 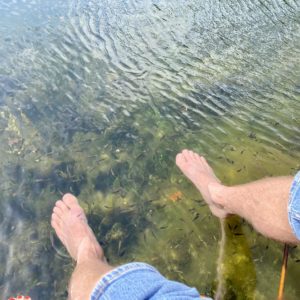 Garra rufa are native to the Middle East, where they have been used as a medical treatment for individuals with skin diseases, like psoriasis. One study has illustrated the effectiveness of fish pedicures in the treatment of psoriasis; however, this treatment was performed in a controlled setting at a medical university in Austria, not at a nail salon.

I went for the first time and at first, a fish pedicure feels a little uncomfortable. It tickles when the fish start to nibble on your feet and is a little disconcerting knowing the fish are biting you. Within a few minutes though, you honestly get used to the feeling, then can settle back, and enjoy it.

You will notice, as the fish nibble away more of the dead skin, less of them will stay around your feet. Why? Simple. Because they only eat dead skin, so there is not much left to eat after a while.

There is only one place in the Florida Keys where you get a fish pedicure and that is Crane Point in Marathon, FL. The pedicure was included in the price of the admission, and we paid around $15 each to enter the park. We hiked around on their trails and then at the end by the Gulf of Mexico there was this back basin. We sat down, took off our shoes and put our feet in. It seemed like we must have hiked for a year because you do not feel like you’re in the keys, it is secluded and so quiet. It felt like you were on a tropical island all by yourself. 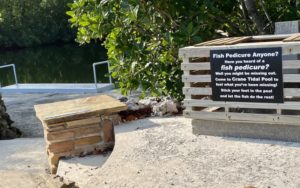 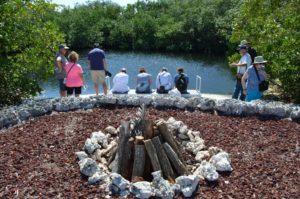