Do you consider yourself an advanced SCUBA diver? If so come down to Marathon Florida and help us celebrate the 100th anniversary of the Florida Keys Overseas Railroad. You’ll get to dive on an artificial reef that was constructed from part of the original railroad bridge. It was sunk off Marathon in 1982 when the new 7 mile bridge was completed.

The Overseas Railroad, an extension of the Henry Flagler Florida East Coast Railway, was called as the most unique railway in the world, and is considered to be one  the most significant engineering feats of  the early 20th Century. It connected the Florida Keys with the mainland of Florida in 1912.  Portions of its structure, which served as a foundation for a portion of the original Florida Keys Overseas Hwy, now lie submerged in 115 feet of water approximately 3.7 miles off Sombrero Lighthouse near Marathon.  The site is a favorite among experienced divers as a challenging drift dive. 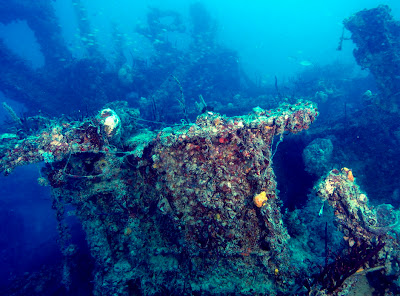 The Marathon reef is one of 13 artificial reef sites between Key Largo and Key West overseen by the Florida Fish & Wildlife Conservation Commission. For more information visit www.fla-keys.com/diving.

Come on down; the water’s fine!

Excellent history of the railroad: http://www.flaglerkeys100.com/fec-railroad-overseas-extension.